Sharing Insights Across the Organization

Example of the types of media often captured in UX research

Almost any organization, big or small, faces a fundamental problem: how to best socialize the results of research.

Although my primary work has involved user experience research, the underlying challenges of sharing insights and data are the same for any type of research: customer, market or user.

Specifically, organizations suffer when they are unable to:

To make matters more urgent, in The Home Depot Quote Center's case, we faced an impending deadline: the publishers of our prior research repository Field Book were no longer supporting the product. We had several years of field investigations, user observations, interviews and usability tests that supported our ongoing design efforts. 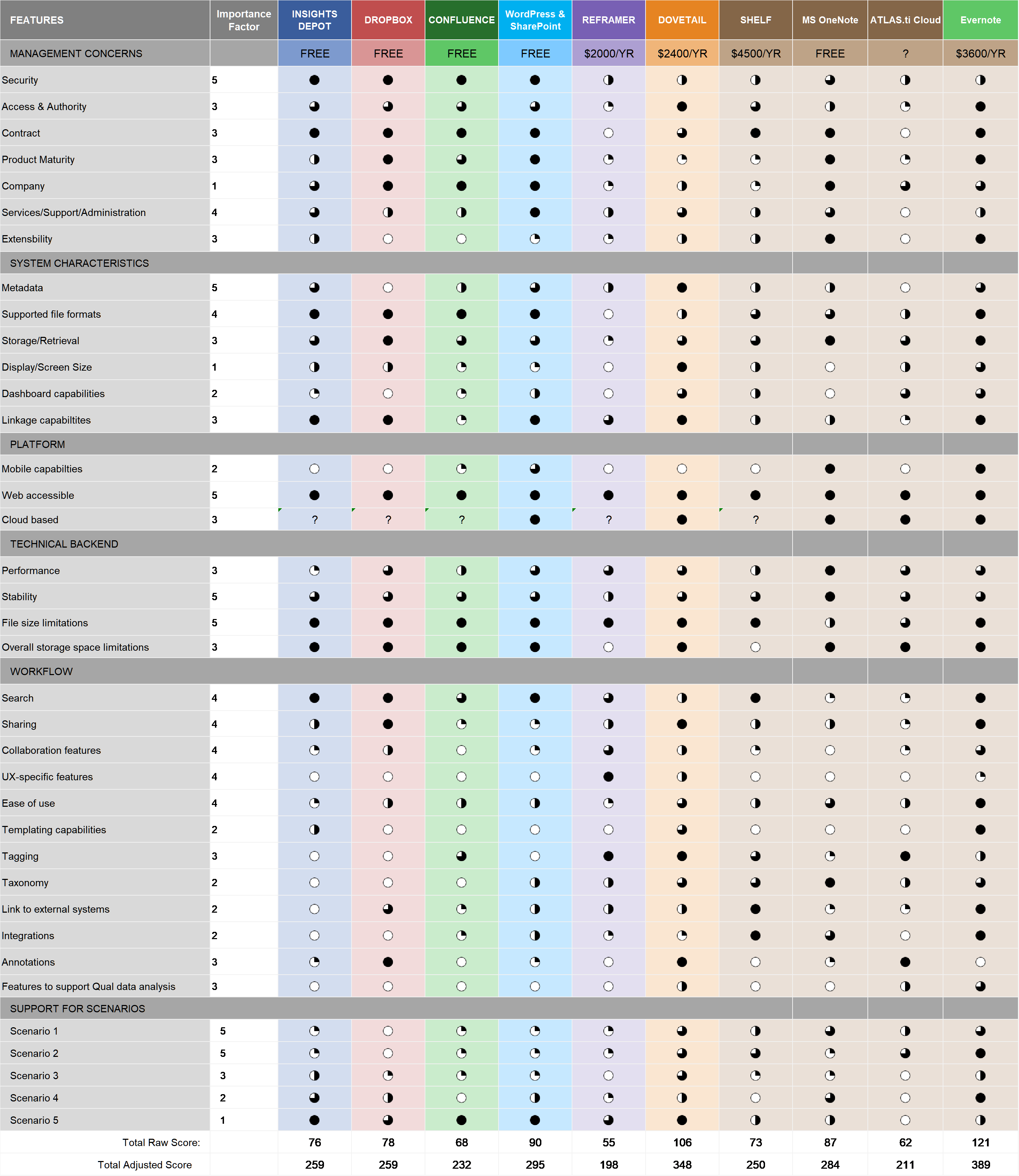 An overview of the research repository scorecard

After a careful scorecard evaluation process (see below) we landed on Evernote. However, The Home Depot's IT and Legal departments had determined Evernote could not be an approved application.

We repeated the scorecard exercise, expanding the candidates. Bloomfire came in as a close second.

A selection of features early on from the scorecard

Scenarios for the research repository

All categories (collapsed) and all candidates

The team started by considering the desired qualities the organization would want from a knowledge repository. We began by including all of the features the UX team would need, such as: ease of use entering and editing information, an ability to handle multiple media types, ease of searching (including inside native documents) and so on.

Relatively early on, however, we decided to take a user-centered approach; we realized that the UX team represented just one primary persona. Other actors in the ecosystem included: product managers, IT, and other associates not necessarily in product or UX, such as leadership or other researchers. The team crafted persona sketches followed by lightweight context scenarios to address these other actors' needs.

With our context scenarios in hand, the feature list expanded significantly to include security issues, ease of signing on, years in business of the vendor, eventually growing to more than 35 rows in the spreadsheet.

Each feature was evaluated on a score of 0 to 4 for each prospective solution which we rendered as "Harvey Balls" using Excel's Conditional Formatting capability. In this way, the results could be viewed at a glance. Because each solution had values for each feature, however, we were able to summarize the results. Using the simple sum of each feature, Evernote clearly stood out as the winner.

But not all features were equally important. So, the team added an importance factor to each row, creating an adjusted score. Evernote remained the clear winner. 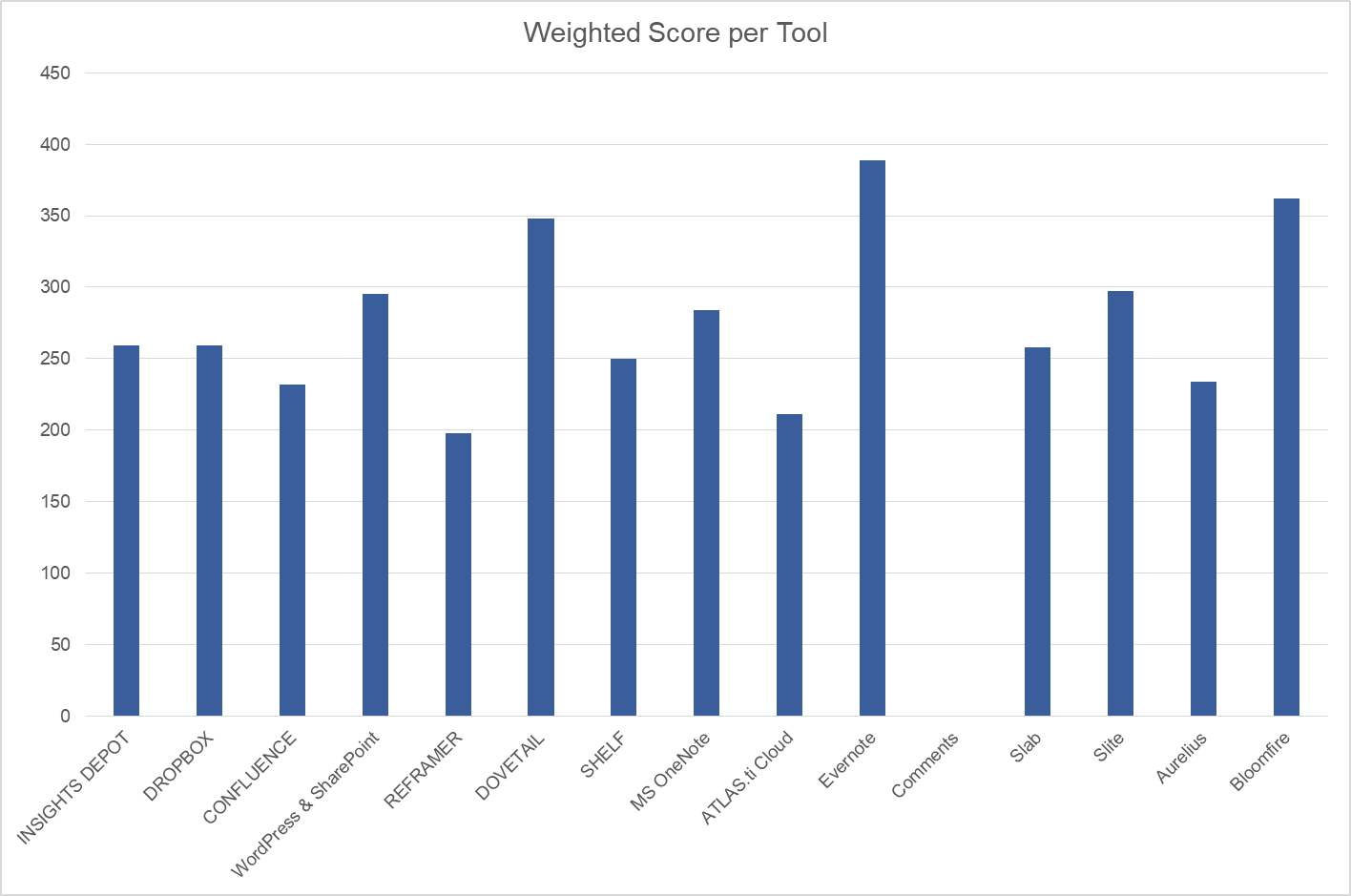 Final results of the weighted scores

Crafting a scorecard appeared relatively simple; it turned out to be more complicated than we had originally expected.

I was responsible for guiding the overall process, including suggesting the scorecard approach and keeping the project on track. Several team members contributed to this effort over a period of several months.

In addition to evaluating the scorecard, and reviewing the evaluative criteria and the context scenarios and personas, I was also involved in trying out the prospective solutions. When we ran into the roadblock with Evernote, I identified additional prospects to evaluate.

Further, I socialized the solution with other Directors and Managers at The Home Depot, offering them trial seats. The power of the solution only would be fully realized if all interested departments had access to and contributed to the repository.

Finally, I negotiated the contract with Bloomfire, including working through The Home Depot's intricate and involved legal and IT approval process.